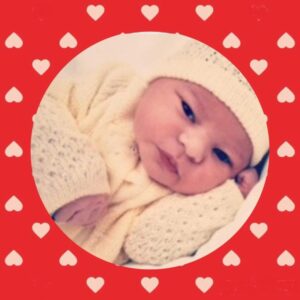 The baby’s father urged her to abort without telling her parents. This would be just between them and her parents didn’t need to know.

Dainy did not want an abortion. She was raised in a Christian home by loving parents and had a beautiful relationship with them. However, she knew she would disappoint them once they find out about her pregnancy. It happened  on her prom night.

This is the pressure many young women face. They are torn between boyfriend and parents and most of the time it is not even their choice to abort. Someone is deciding for them to sentence the innocent unborn child to death without the opportunity of granting the young mom any options.

Her boyfriend brought her to our clinic seeking the abortion. After a positive pregnancy test, Dainy saw her 16 week baby boy for the first time in our ultrasound. She wept as she covered her belly in an attempt to protect her unborn child. She asked us not to let the boyfriend in but to call her mother instead.

While her mother arrived Dainy authorized counselor Blanca to speak to the boyfriend and explain the situation. He was scared about their parents finding out about the pregnancy and that is why he thought abortion was the only solution.

What happened within the next hour was God’s love and grace all around. Dainy’s mother entered the ultrasound room and cried with her daughter. She couldn’t stop thanking us for saving her grandson. Blanca asked if her boyfriend could come in and  Dainy agreed. At that very moment, Bobby also saw his baby boy and wept with repentance asking for forgiveness.

During the following months, Dainy attended our “Earn While You Learn” Parenting Classes which allowed her to obtain her baby’s crib and baby items. Bobby attended with her every time he had a chance.

On February 14th, Baby Sebastian was born. Young Bobby went from being a scared father to becoming a loving daddy rejoicing with Dainy on the birth of their son. We were there to rejoice with them and their family glorifying our Lord for allowing us to rescue baby Sebastian from an abortion.