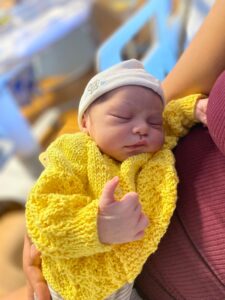 Maria Piña came to the United States from Chile. She was in a relationship with her boyfriend for only 4 months and found herself pregnant. Her boyfriend came in with her to our clinic requesting the abortion pill for his girlfriend. He wanted to go in with her but we explained to him that only she was allowed in the counseling room. She was very afraid of him because he was very controlling. Maria thought there was no other way out. However, when she heard her baby’s heartbeat and saw him on the screen, she was shocked. She never thought it looked like a baby. They told her it was a clump of cells. In spite of her boyfriend pressuring her to abort, Maria chose life for her baby. He left her there alone at the clinic so she had to call her mother to pick her up. Thank God her mother showed compassion and offered her support. Glory to God, baby Agustin was born healthy and beautiful on November 1, 2022!