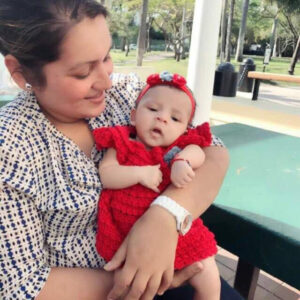 Karla had just gotten to Miami from Honduras. She had no one here except her boyfriend. When she suspected she was pregnant, he told her she had to abort because he did not want children. Karla was a Christian and knew abortion was not an option. However, she was desperate and convinced aborting was the only way out. But God convicted and returned to our clinic within a few hours. Our team rejoiced when she asked God for forgiveness and decided to have her baby. When Baby Alondra was born her father asked for forgiveness and became her Daddy.